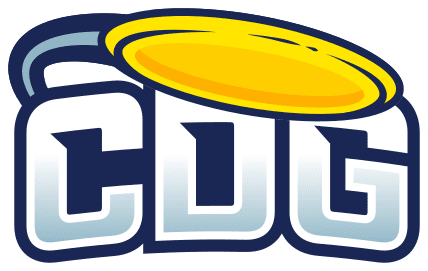 College Disc Golf will return in the Fall of 2021 with a complete regular season consisting of one level of qualification for four player teams interested in earning their bids to the DI division at the National Championship. All other divisions do not require qualification. Collegiate events will consist of singles play and the 4 person alternating team doubles format. Women’s teams consist of two players. 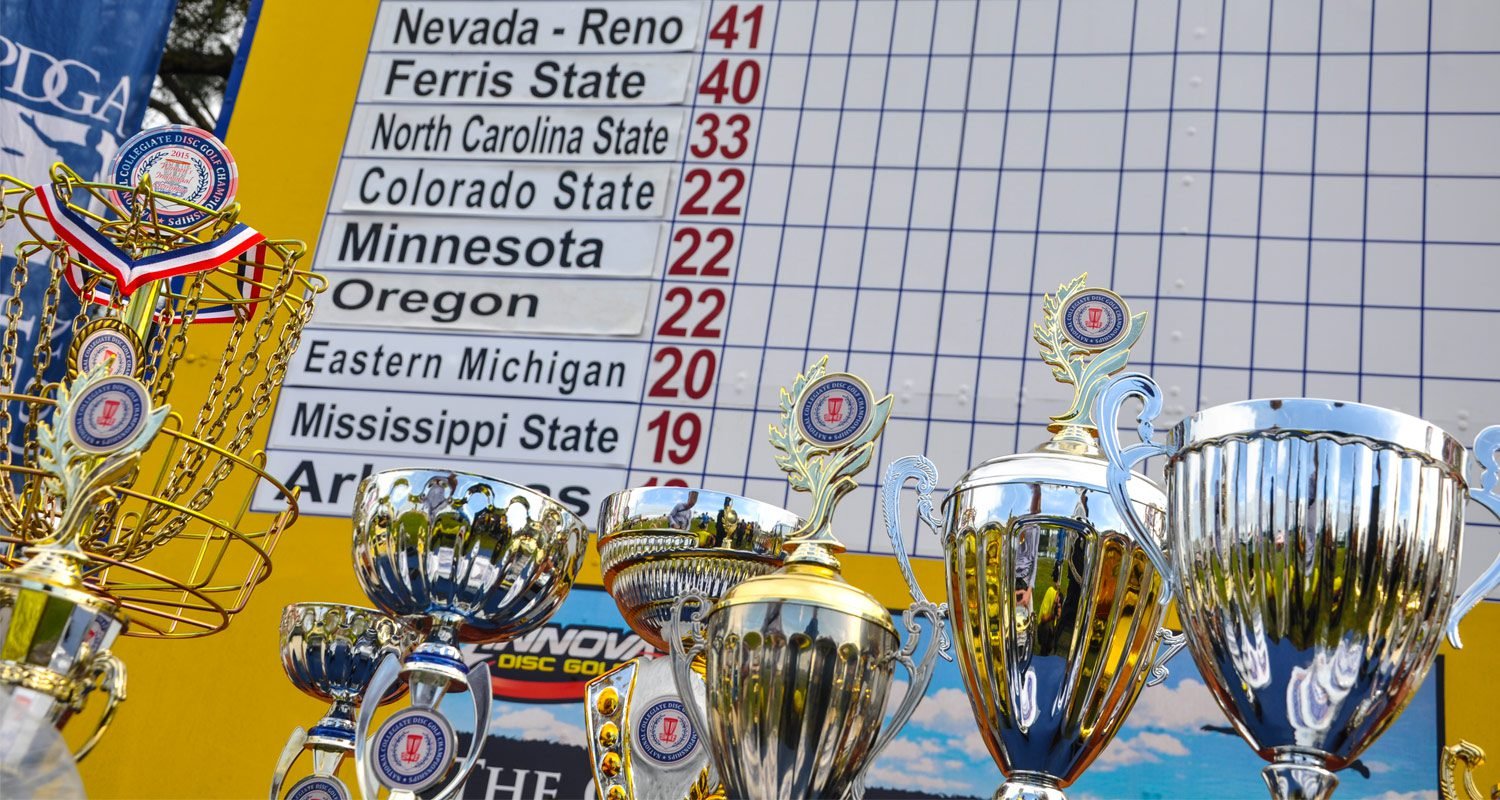 You must compete as a team. You need 2 players for a Women’s team and 4 for all other divisions.

How do we play in CDG events?

Current College Disc Golf membership is required to compete in CDG events. Have you reached out to us? You need a team page and login before you can join and renew your CDG membership. After your join, your team can compete in any qualifier event.

What does a CDG event consist of?

College Disc Golf events are organized and ran by volunteers that range from Tournament Directors with PDGA Major experience to students running their first events. There are two main types of events – conference play (league like play, more casual events) and qualifier events (more serious events that require CDG membership and where you earn your invite to the CDGNC). All CDG qualifier events are PDGA sanctioned and consist of at least round of team alternating shot doubles and typically singles play. More scoring and format information. Event format and layouts are determined by the TD for that event. Events can be one or two days. Find a qualifier near you – qualifier event map and schedule.

Do you need to play a qualifier event to play in the National Championship?

How do we qualify for DI?

Only teams interested in competing in Division 1 (DI) need to qualify. To qualify, earn your invite by being one of the highest placing teams without a bid at any qualifier on the schedule! Players who were on the team that earned the bid are irrelevant. Bids are are awarded to the team and your school can only field one team in DI. The players on that team is up to your organization.

Are students graduating in December eligible for the National Championship that spring?

NEW for the 2021-2022 Season – PDGA memberships are now included with your College Disc Golf Season Membership!

These events make College Disc Golf happen on the ground level.  Supported by our Tournament Directors, these qualifiers are your path to the National Championships. Find out more here.

These organizations of geographically centered teams and their leadership are responsible for growing collegiate disc golf on a grassroots level.  In an effort to launch the new qualifying format focused around the creation of conferences we are asking your team to either form a conference or join one near you. You can find more information on the conferences page.

How to Qualify for the 2022 National Championships

We will host a field of 54 teams in the DI division, 36 teams in DII, 18 teams in DIII, and 18 teams in the Women’s division for the 2022 tournament. Only teams participating in DI are required to qualify. All other divisions will fill on a first come first serve basis with priority in DII given to schools without a team in DI. There is a limit of one team per school in DII and DI. That means there are 54 spots to award through our rankings, invitations, and qualifying events throughout the year.

To qualify, teams must participate in our qualifier events. Any team may play in qualifier tournaments in any region. Teams can earn a spot by performing well at an event and winning one of the spots awarded there or via our rankings qualifications. Any vacated spots will be awarded through our rankings system at the end of the season. The highest ranked team that has not already qualified will earn their way in.

Yes, you can run a qualifier!

We will host a field of 54 teams in the DI Division at the 2022 College Disc Golf National Championship. These are 54 spots will be awarded through rankings, invitations, and qualifying events throughout the year.

How DO YOU Qualify for DI at the 2022 National Championship?

To qualify for the top division, teams must participate in Regional Qualifiers. Any team may play in qualifier tournaments in any region. Teams can earn a bid by performing well at an event and winning one of the bids available there or via rankings qualifications. Bids are awarded to the highest placing team in an Any vacated spots will be awarded through rankings at the end of the season. The highest-ranked team that has not already qualified will earn their way in.

YOU DO NOT NEED TO QUALIFY TO PLAY IN DII and DIII.

Apply to run a Regional Qualifier for the 2023 National Championships

Passion, tradition, and rivalries are some of the reasons collegiate sports foster the highest levels of competition as well as camaraderie in sports. Are you interested in bringing this level of competition to a course in your area? College Disc Golf is now accepting applications from motivated individuals and organizations that are interested in hosting a qualifier event for the 2023 College Disc Golf National Championships.  Please complete and submit the application below.

Rankings are created from data collected from collegiate disc golf team events within the current season and the last National Championships. All rostered players with PDGA numbers and current College Disc Golf Memberships are included.

Results from events with two or more teams are included in the rankings.

Tournaments are given a base placing value of 750 points. Players receive points according to the percentage of players that they finished ahead of multiplied by the total placing points. Teams also receive 150 points for participating and 100 points for finishing. The winners of the event receive a 100 point bonus.  The average of points earned from each tournament with the team’s worst finish only counting half and the player’s best finish counting twice plus 20 points for each event played in.

Players’ averaged PDGA round ratings from College Disc Golf events will count towards the rankings. For players with more than 1 event, their best rated round counts twice.

The sum of tournament points earned and the averaged PDGA ratings points determine the Player Rankings. Rankings gender separation will be based upon their play in gender protected divisions according to PDGA guidelines.

Rankings are created from data collected from collegiate disc golf team events within the current season and the last National Championships. All teams that have competed in a NCDGC tournament are included.

Results from events with three or more teams are included in the rankings. The last National Championship berth at the end of the regular season will be awarded to the highest ranked team that is not already qualified.

Tournaments are given a base placing value of 1,000 points plus 5 times the number of teams participating in the event. Teams receive points according to the percentage of teams that they finished ahead of multiplied by the total placing points. For example, if a tournament has 13 teams attending there will be 1,065 placing points (13*5=65).

The average of points earned from each qualifier tournament is used to calculate each team’s qualifier season average. That total counts towards 60% of a team’s adjusted total. Each team’s point total from the last National Championships counts as the other 40% of the adjusted total. Teams also receive 25 points added to their adjusted total for each event they play in.

What is a College Disc Golf Conference?

A conference is a regionally active group of College Disc Golf teams that compete in consistent and competitive play during the collegiate season and host a Conference Championship. These conferences should consist of 3-10 teams and will be formed by the teams themselves or interested individuals who are active in their disc golf scene.

Conferences are governed by the leadership that forms the conference. Conference event formats and the decisions regarding funding, sponsorship, and the future direction will be decided by the Conference Leaders. These leaders will be provided with support, resources, and an open line of communication to College Disc Golf for assistance.

How do you form a conference?

Yes, you can run a College Disc Golf Conference! Our inclusive and encouraging atmosphere is what makes our sport special. By hosting regular, competitive, and accessible events we can provide this experience to the collegiate disc golf scene near you. By forming a College Disc Golf Conference, we can create a welcoming atmosphere that encourages new players and fosters competition at the highest levels of our sport.

Using our contact lists, active team map, and other resources we can find and form teams near you for your conference! Fill out an application below.

Teams are generally comprised of four players. Teams may compete with fewer players but will be at a disadvantage.

Team rounds are played with two sets of teammates, one ODD pair, one EVEN pair. The ODD set will tee off on every odd-numbered hole, while the EVEN set tees off on every even-numbered hole. After the tee shots, the team chooses which of the two lies to play. From there, the set that did not tee throws their two shots. Again, the whole team decides which lie to play from and the set that teed off would throw. That alternating process continues until the hole is complete. On the next hole, the corresponding set of teammates according to the hole number, ODD or EVEN, would tee off no matter which set putt out on the previous hole. This format allows for each player to tee off the same amount of times and for teams to play as a whole. Each hole has two teams playing together as an eight-some.

In the event that there are less than 4 players on a team, the individual without a partner will only have one throw per turn.

Women’s Division – Female players will engage in regular doubles play with a partner.

For the Women’s Championship, the sum of the 2  singles scores counts toward the cumulative team score. Each hole should have no more than two teammates competing to prevent conflicts when making rules calls.

All players participating on a team for the Regional Qualifiers and the National Championship must be listed on the team roster.

All players competing in the National Championship must be current PDGA members in good standing. Players who are not current members must login to their accounts and purchase a membership prior to being rostered. Non-members who do not register by the post-season competition dates will be ineligible to play until they have the appropriate membership.

Eligibility status will be checked by College Disc Golf through the rostering process, in conjunction with information from school registrar offices, as well as using information from the PDGA and team records.
College Disc Golf reserves the right to use additional relevant information, should it become available, in a fair and consistent manner to ensure player and team eligibility standards are met throughout post-season competition.

Player eligibility status may be re-checked at any point prior to, during, or following the post-season. Rosters will be randomly re-verified with school registrar offices following each post-season competition (i.e. conference championships, Regional Qualifiers, and the National Championship).

Failure to abide by any of the above rules may result in ramifications outlined in the guideline sections, Violations and Sanctions.